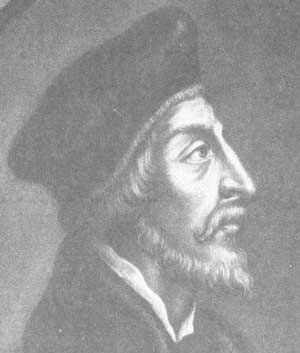 The condemnation of Jan Hus took place on July 6, 1415, in the presence of the solemn assembly of the council in the cathedral. After the performance of high mass and liturgy, Hus was led into the church. The bishop of Lodi delivered an oration on the duty of eradicating heresy; then some theses of Hus and Wycliffe and a report of his trial were read.

Hus was born in Husinec, Kingdom of Bohemia in 1369. He traveled to Prague at an early age where he supported himself by singing and serving in churches. In 1393, Hus earned a degree of Bachelor of Arts from the University of Prague and he earned his master's degree in 1396. In 1400, he was ordained as a priest and became rector of the university in 1402–03. He was appointed a preacher at the newly built Bethlehem chapel around the same time. Hus was a strong advocate for the Czechs, and therefore the Realists, and he was influenced by the writings of John Wycliffe. Although many works of Wycliffe were proscribed in 1403 by the church, Hus translated Trialogus into Czech and helped to distribute it. On Dec. 4, 1414, the pope had entrusted a committee of three bishops with a preliminary investigation against Hus.

On June 5, 1415, John Hus was tried for the first time, and for that purpose was transferred to the Franciscan monastery, where he spent the last weeks of his life. He acknowledged the writings on the Church against Palecz and Stanislaus of Znaim as his own, and declared himself willing to recant, if errors should be proven to him. Hus conceded his veneration of Wycliffe, and said that he could only wish his soul might some time attain unto that place where Wycliffe's was.

The condemnation of Jan Hus took place on July 6, 1415, in the presence of the solemn assembly of the council in the cathedral. After the performance of high mass and liturgy, Hus was led into the church. The bishop of Lodi delivered an oration on the duty of eradicating heresy; then some theses of Hus and Wycliffe and a report of his trial were read.

An Italian prelate pronounced the sentence of condemnation upon Hus and his writings. Again he protested loudly, saying that even at this hour he did not wish anything but to be convinced from Holy Scripture. He fell upon his knees and asked God with a low voice to forgive all his enemies. Then followed his degradation-- he was enrobed in priestly vestments and again asked to recant; again he refused. With curses his ornaments were taken from him, his priestly tonsure was destroyed, and the sentence was pronounced that the Church had deprived him of all rights and delivered him to the secular powers. Then a high paper hat was put upon his head, with the inscription Haeresiarcha. Thus Hus was led away to the stake under a strong guard of armed men.

The executioners undressed Hus and tied his hands behind his back with ropes, and his neck with a chain to a stake around which wood and straw had been piled up so that it covered him to the neck. There upon the fire was kindled with John Wycliffe’s own manuscripts used as kindling for the fire. His ashes were gathered and cast into the nearby Rhine River.

2. Paul was never a member of the devil, even though he did certain acts which are similar to the acts of the church's enemies.

3. Those foreknown as damned are not parts of the church, for no part of the church can finally fall away from it, since the predestinating love that binds the church together does not fail.

4. The two natures, the divinity and the humanity, are one Christ.

5. A person foreknown to damnation is never part of the holy church, even if he is in a state of grace according to present justice; a person predestined to salvation always remains a member of the church, even though he may fall away for a time from adventitious grace, for he keeps the grace of predestination.

6. The church is an article of faith in the following sense: to regard it as the convocation of those predestined to salvation, whether or not it be in a state of grace according to present justice.

7. Peter neither was nor is the head of the holy catholic church.

8. Priests who live in vice in any way pollute the power of the priesthood, and like unfaithful sons are untrustworthy in their thinking about the church's seven sacraments, about the keys, offices, censures, customs, ceremonies and sacred things of the church, about the veneration of relics, and about indulgences and orders.

9. The papal dignity originated with the emperor, and the primacy and institution of the pope emanated from imperial power.

10. Nobody would reasonably assert of himself or of another, without revelation, that he was the head of a particular holy church; nor is the Roman pontiff the head of the Roman church.

11. It is not necessary to believe that any particular Roman pontiff is the head of any particular holy church, unless God has predestined him to salvation.

12. Nobody holds the place of Christ or of Peter unless he follows his way of life, since there is no other discipleship that is more appropriate nor is there another way to receive delegated power from God, since there is required for this office of vicar a similar way of life as well as the authority of the one instituting.

13. The pope is not the manifest and true successor of the prince of the apostles, Peter, if he lives in a way contrary to Peter's. If he seeks avarice, he is the vicar of Judas Iscariot. Likewise, cardinals are not the manifest and true successors of the college of Christ's other apostles unless they live after the manner of the apostles, keeping the commandments and counsels of our lord Jesus Christ.

14. Doctors who state that anybody subjected to ecclesiastical censure, if he refuses to be corrected, should be handed over to the judgment of the secular authority, are undoubtedly following in this the chief priests, the scribes and the pharisees who handed over to the secular authority Christ himself, since he was unwilling to obey them in all things, saying, It is not lawful for us to put any man to death; these gave him to the civil judge, so that such men are even greater murderers than Pilate.

15. Ecclesiastical obedience was invented by the church's priests, without the express authority of scripture.

16. The immediate division of human actions is between those that are virtuous and those that are wicked. Therefore, if a man is wicked and does something, he acts wickedly; if he is virtuous and does something, he acts virtuously. For just as wickedness, which is called crime or mortal sin, infects all the acts of a wicked man, so virtue gives life to all the acts of a virtuous man.

17. A priest of Christ who lives according to his law, knows scripture and has a desire to edify the people, ought to preach, notwithstanding a pretended excommunication. And further on: if the pope or any superior orders a priest so disposed not to preach, the subordinate ought not to obey.

18. Whoever enters the priesthood receives a binding duty to preach; and this mandate ought to be carried out, notwithstanding a pretended excommunication.

19. By the church's censures of excommunication, suspension and interdict the clergy subdue the laity, for the sake of their own exaltation, multiply avarice protect wickedness and prepare the way for antichrist. The clear sign of this is the fact that these censures come from antichrist. In the legal proceedings of the clergy they are called fulminations, which are the principal means whereby the clergy proceed against those who uncover antichrist's wickedness, which the clergy has for the most part usurped for itself.

20. If the pope is wicked, and especially if he is foreknown to damnation, then he is a devil like Judas the apostle, a thief and a son of perdition and is not the head of the holy church militant since he is not even a member of it.

21. The grace of predestination is the bond whereby the body of the church and each of its members is indissolubly joined with the head.

22. The pope or a prelate who is wicked and foreknown to damnation is a pastor only in an equivocal sense, and truly is a thief and a robber.

24. If a pope lives contrary to Christ, even if he has risen through a right and legitimate election according to the established human constitution, he would have risen by a way other than through Christ, even granted that he entered upon office by an election that had been made principally by God. For, Judas Iscariot was rightly and legitimately elected to be an apostle by Jesus Christ who is God, yet he climbed into the sheepfold by another way.

25. The condemnation of the forty-five articles of John Wyclif, decreed by the doctors, is irrational and unjust and badly done and the reason alleged by them is feigned, namely that none of them is catholic but each one is either heretical or erroneous or scandalous.

26. The viva voce agreement upon some person, made according to human custom by the electors or by the greater part of them, does not mean by itself that the person has been legitimately elected or that by this very fact he is the true and manifest successor or vicar of the apostle Peter or of another apostle in an ecclesiastical office. For, it is to the works of the one elected that we should look irrespective of whether the manner of the election was good or bad. For, the more plentifully a person acts meritoriously towards building up the church, the more copiously does he thereby have power from God for this.

27. There is not the least proof that there must be one head ruling the church in spiritual matters who always lives with the church militant.

28. Christ would govern his church better by his true disciples scattered throughout the world, without these monstrous heads.

29. The apostles and faithful priests of the Lord strenuously governed the church in matters necessary for salvation before the office of pope was introduced, and they would continue to do this until the day of judgment if--which is very possible--there is no pope.

30. Nobody is a civil lord, a prelate or a bishop while he is in mortal sin.